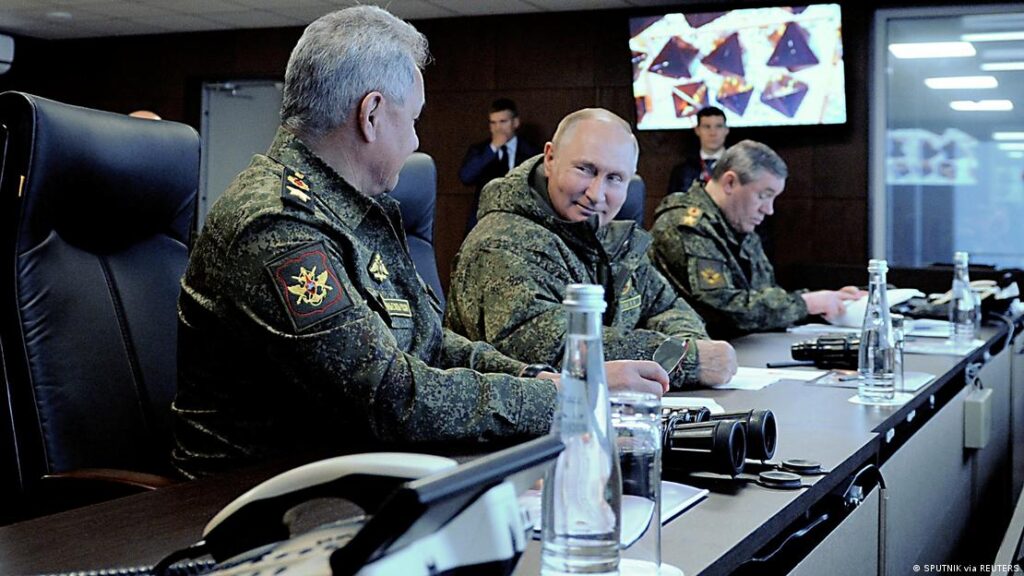 General Sergey Surovikin was commander-in-chief of the “special military operation,” as Russia still officially calls its war of aggression against Ukraine, for just three months. On Thursday, Russian Minister of Defense Sergei Shoigu demoted him to deputy commander. He will now answer to Russia’s chief of the general staff, General Valery Gerasimov, who will take over the leadership of Russia’s military in Ukraine — nominally, at least.

This is not the first restructuring of the Russian chain of command since the start of the invasion, but the timing is surprising, as Russia is making small military advances for the first time in months. Military experts are divided over the reasoning behind it. They say that Surovikin has not actually committed any blunders during his time as commander-in-chief in Ukraine. He is also said to be reasonably popular with the troops, and to be on good terms with political hard-liners. So why has he been replaced?

Under Surovikin’s leadership, the Russian army pulled out of the Ukrainian city of Kherson. Following Russia’s declaration that it had annexed the entire Kherson region, the withdrawal from the only regional capital its troops have captured to date was seen as a political humiliation for the Kremlin.

However, experts say it was the right decision from the military’s point of view, as it was no longer possible to hold Russian positions on the west bank of the Dnipro river. Andras Racz, a security expert at the German Council on Foreign Relations, described the retreat itself as a success.

“Surovikin managed to organize a relatively orderly retreat from the west bank of the Dnipro,” he told DW. “In addition, the front along the Kharkiv region was restabilized under his command, in the northern part of Luhansk. […] So from the Russians’ operational perspective, he did a good job.”

According to media reports, the Russian military leadership managed to move large quantities of material and large numbers of soldiers away from Kherson and the advancing Ukrainian army. Among them were some of the Russian army’s top fighting units — paratroopers, who could be of crucial importance for Russia over the course of the war.

Unlike Surovikin, some observers believe that Gerasimov demonstrated his incompetence in the very first days of the war. Together with Defense Minister Shoigu, he made a series of disastrous decisions when planning the invasion, especially in the north of Ukraine.

In a tweet, military expert Dara Massicot concluded: “Under Shoygu and Gerasimov’s command, a large percentage of the Ground Forces and Airborne forces (equipment and personnel) were destroyed. Thousands of both are gone. This leadership is so negligent that it should have been grounds for dismissal in any normal system.”

Putin is consolidating his power

So what is going on in the Russian Ministry of Defense? Andrey Kolesnikov is a political scientist at the Carnegie Endowment for International Peace. He says that different factions in the Russian security apparatus are competing for power. On one side, he says, are Shoigu and Gerasimov, supported by more moderate forces. Sergey Surovikin, meanwhile, is especially popular with hard-liners and can even be considered one himself, along with Ramzan Kadyrov, the head of the Chechen Republic, and Yevgeny Prigozhin, who leads the notorious Wagner mercenary group.

According to Kolesnikov, the Kremlin’s decision to disempower hard-liners in the Ministry of Defense was made by none other than Vladimir Putin himself. “We see how, in this way, Putin maintains a balance of political power between the various forces,” he says. “He plays them off against each other, keeps them under observation, and makes sure none of them get too strong.”

Dmitry Oreshkin, a political scientist and professor at the Free University in Riga, takes the same view. “It’s about securing [Putin’s] power,” he told DW. “In order to ensure this, Putin has to mediate between these powerful groups in the military. At the same time, he encourages competition between the factions so no one becomes too powerful.”

From special operations to war

However, according to Oreshkin, Gerasimov’s appointment marks a new level of escalation in Russia’s war on Ukraine. Until now, only ordinary generals have led the so-called special military operation: “With this, Putin is acknowledging that it is no longer a ‘special operation’ being led by ordinary commanders, but a real war, involving the whole of Russia.”

Andras Racz from the German Council on Foreign Relations does not believe much will actually change for the Russian armed forces at the operational level. “It’s pretty unlikely that Gerasimov will assume operational leadership,” he says. “After all, it’s been 10 years since he’s led any soldiers.” Racz thinks it more likely that Gerasimov will run the coordination of the various units, while Surovikin continues to lead on the ground.