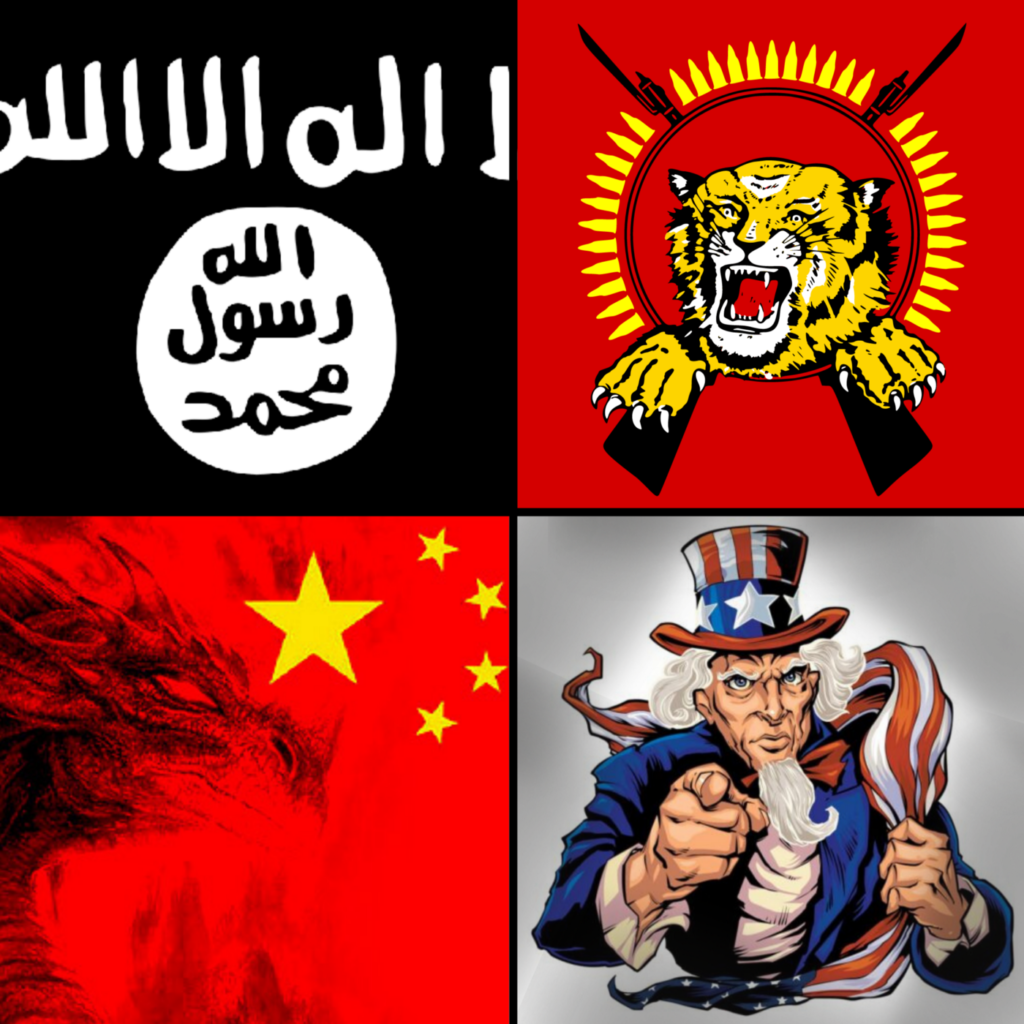 The vicious head of the terror snake meticulously searches for a burrow to strengthen and nourish its body of destruction. The burrow, being political, social and regional instability, makes Sri Lanka a pertinent base for the re-emergence of terrorism — both ideological separatism and religious extremism.

As Sajith Premadasa promised in March, an Arab Spring-style protest-riot compilation emerged against the Gotabaya administration that effectively led to regime change in the country. Amidst the raging support for the ‘Aragalaya’ movement in Sri Lanka, one key factor is consistently left out of the equation — the potential resurgence of terrorism on the island. Should Sri Lankans be worried about a long-term threat? Absolutely. Could Sri Lankans be worried about a long-term threat? That is a question of immense pondering owing to the current impediment of mile-long queues, galloping inflation, food shortages and the constant state of difficulty.

We can critically evaluate certain politically unstable regions which posit a clear pedestal of terrorist threat actors rising to feed on the instability, vulnerability and national insecurity of the region in question. The Middle East’s Arab Spring is widely perceived as a political failure due to prolonged crises that have arisen from the protests and riots in Egypt, Iraq, Libya, Syria, and Yemen among others. Experts including Dr Ibrahim Al-Marashi, from the California State University, have widely written about the rise of ISIS owing to the political instability in the Middle East.

The crisis in Syria has claimed the lives of over 306,000 civilians as a consequence of the emergence of terrorism, proxy military campaigns and the civil war that ensued. The Islamic State rose to its peak in 2014 by feeding on the opportunistic element of instability in the Middle East that escalated through the Arab Spring among other factors. Likewise, other terror groups including al-Qaeda, Muslim Brotherhood and Hay’at Tahrir al-Sham (Jabhat al-Nusra) consolidated their power and influence after the protest-riot events overthrew and deposed governments.

Yemen and Libya were not spared from terrorism and conflict either, where Yemen continues to suffer a bloody civil war at the hands of the Houthi rebels, who emerged powerful through the Arab Spring. Libya suffered two civil wars in a decade and continues to be tribulated by a ‘long-standing political stalemate’ as an expert at the US Institute of Peace puts it. Although the Arab Spring began in the early 2010s, the ugly sleeve of the events continues to rock Libya, where a failed invasion of the capital Tripoli was attempted even two months ago.

The crisis in Yemen began comparably to the current events occurring in Sri Lanka. The presidential residence of President Ali Abdullah Saleh was attacked in 2011, while vandalism and arson continued for years. Similarly, in Libya, makeshift townships similar to GotaGoGama were propped up by protesters in Benghazi and other cities. The conspicuous similarity between certain Arab Spring episodes and the Sri Lankan Aragalaya raises concern about Sri Lanka’s potential plunge into a failed state like the majority of nations that were affected by the Arab Spring.

Sri Lankans are a people who have been exposed to terrorism through multiple instances and thus we understand the gravity of enabling the vicious head of terror to rise in our nation. The 27-year war against LTTE terrorism ripped generations of Sri Lankans off of a sense of security, peace and harmony. Likewise, the 2019 Easter Bombings marked the largest Islamic State massacre outside of its former caliphate in Iraq and Syria, which drove a wedge between the religious communities in Sri Lanka.

Sri Lanka is at a highly volatile political juncture — a powder keg of economic turmoil, political instability and resting ethnic division. Any emergence of terrorism could easily bulldoze the status quo of the country from a greyish crisis to a black dystopia of cataclysm. The national security of the nation rests not merely in the competency of the armed forces and intelligence but also in the minds of the average Sri Lankan who ought to be vigilant in the face of seeping extremist groups who attempt to exploit Sri Lanka when she is on her knees.

The principled ambitions of the Islamic State rest in the objective of a caliphate that geographically spans the Middle East, North Africa, Central Asia and South Asia. The Easter Sunday Attack that resulted in the deaths of over 260 Sri Lankans was in line with the IS strategy to drive Sri Lanka into the long-term caliphate of the State. Sri Lanka remains on the Islamic State’s radar of ideological and terror seizure.

In a similar fashion, the LTTE international network leads the information war by a mile. With the ever-increasing recruitment of foreign politicians through votes and funds, the LTTE fronts in the West attempt to exploit Western political influence to achieve Prabhakaran’s vision of a separate Eelam in the North and East of Sri Lanka.

Against this backdrop, the LTTE-aligned Tamil Guardian propaganda group published an op-ed piece titled “Time for Tamil Eelam”, which called for immediate separation in Sri Lanka. The article outwardly claims that “only an independent Tamil state can bring stability to the island” — an inscribed reminder of the threat of separatism re-emerging on the island. The LTTE international network remains strong, where Black Tiger suicide bombers are commemorated and worshipped, while politicians in London, Washington and Ontario obey the commands of the LTTE fronts. Last year, the Indian intelligence network arrested Satkunam alias Sabesan on charges of attempting to revive the LTTE in Sri Lanka. The political instability on the island creates a national security vacuum that must be decisively and rigorously filled through monitoring and intelligence sharing. Concurrently, it goes without saying that the support of certain groups within the Aragalaya on unsubstantiated claims of genocide simply strengthens the LTTE’s narrative for separatism in our nation.

While the Middle East remains a regional hotspot for violence, the withdrawal of Western forces from Iraq, Syria and Afghanistan signal a shift in regional strategy for the United States partly away from the Middle Eastern dimension. In March 2022, US ambassador to Sri Lanka Julie Chung, in an event in Colombo, delineated President Biden’s sustained focus on the Indo-Pacific region. The novel focus is an extensive scheme to strengthen US influence in the region, in the face of rising Chinese leverage in the Indian Ocean. A number of reports emerge of the US government’s involvement in regime change in Sri Lanka, which begs the question as to whether Sri Lanka is already in the power grip of influence between the Eagle and Dragon — a proxy campaign that has potential to bury the nation in violence and instability.

While the Aragalaya continues its protest and demonstrations calling for the newly elected president to step down, multiple slithering threats of separatism, extremism and proxy influence proliferate on the sidelines. It is imperative that the Sri Lankan citizen is made aware of the emerging threats so that the vicious head of the snake does not crawl into this burrow of instability.