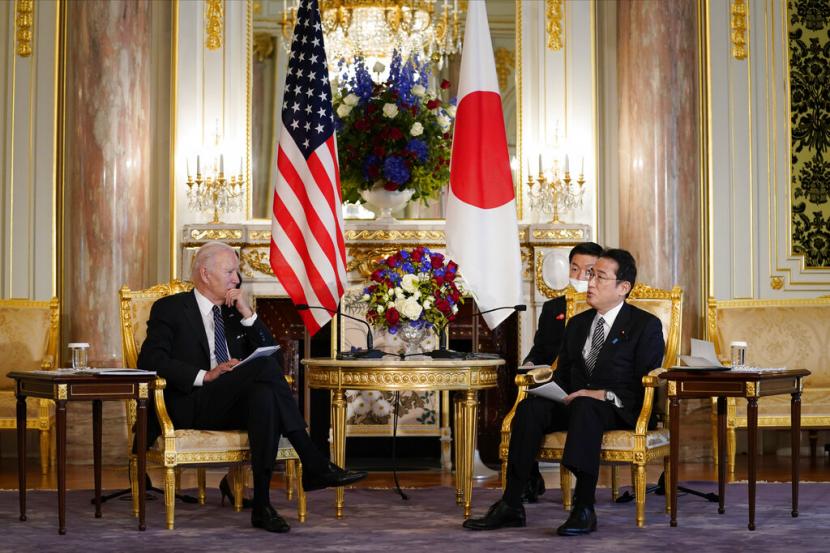 Japan is increasingly trying to justify its ongoing militarization under the pretext of the so-called external threats. Looking around the region, it is Japan that is pushing the regional situation closer to the edge of danger, following the US strategy closely. Tokyo’s move deserves much vigilance. If it continues to act as a pawn of the US in the Asia-Pacific region to stir up trouble here, Japan must be wary of becoming a victim itself of the US or even the Ukraine of East Asia.

Concluding his recent G7 trip in Washington, Japanese Prime Minister Fumio Kishida said Saturday that he shared with the leaders of the bloc his “strong sense of crisis regarding the security environment in East Asia.” “Ukraine may be the East Asia of tomorrow,” the Japanese leader noted, adding that the security of Europe and the Indo-Pacific are “inseparable.”

This is not the first time Kishida has made such a “warning.” In fact, since the beginning of the Russia-Ukraine conflict, “East Asia is the Ukraine of tomorrow” has become one of his favorite phrases. For instance, he repeated the exact same view in his keynote speech at the 19th Shangri-La Dialogue in Singapore in June and later that month at the NATO summit.

The message Kishida wants to convey is clear: It calls for more attention to the region and Japan’s so-called security concerns from the US and its NATO allies, which have been focusing on countering Russia in Europe since the war broke out. In particular, Kishida’s words are aimed at China. He is trying to convince other Western countries that China is the next “biggest challenge” that must be jointly dealt with by the West.

Such an idea was further hyped during the Japanese leader’s recent trip to Europe and the US. In the 2+2 meeting on Wednesday, Tokyo and Washington reached a consensus on how to handle Beijing, establishing a “strategic alliance” against it, the RFI reported.

Furthermore, by pushing for cooperation with Europe in realizing a “free and open Indo-Pacific,” Kishida attempts to bring more NATO members into the framework of its East Asia strategy and persuade them to strengthen military cooperation with Japan to confront China.

Lian Degui, the director of the Department of Japanese Studies at Shanghai International Studies University, said that by stating “East Asia is the Ukraine of tomorrow,” what Japan and the US mean is that they will hinder China’s reunification.

But no matter how hard it hypes up the “China threat” theory, Japan is following Washington’s steps to push the situation in East Asia toward a possible conflict. The country has been stepping up efforts to strengthen its military power to “secure a free and open Indo-Pacific.” The most significant move was the approval of three key security documents last month.

The main pillar of the documents, including the new National Security Strategy, describes China as “the greatest strategic challenge” that Japan has ever faced, specifies the possession of counterstrike capabilities to destroy enemy missile launch bases and other military targets for self-defense and aims to increase the country’s defense budget to about 43 trillion yen ($318 billion) for the five years from fiscal 2023. Judging from Japan’s past militarization history, more regional countries have begun to worry that these actions will threaten the current peace and stability, contrary to Japan’s proclaimed visions for the region.

“If Japan truly hopes to see a peaceful and stable East Asia, it should seriously reflect upon its history of militarist aggression, draw lessons from it, instead of going about stirring up trouble and fanning the flame,” then Chinese Foreign Ministry spokesman Zhao Lijian said in July.

Japan should also reflect on how tightly it wants to be tied to the US strategy. As for now, it’s clear that no matter who is in power in Japan, the country’s foreign policy follows that of the US. But does that really benefit Tokyo? If it continues to act as a pawn of the US in the Asia-Pacific region, Japan must be wary of becoming a victim of the US or even the Ukraine of East Asia.