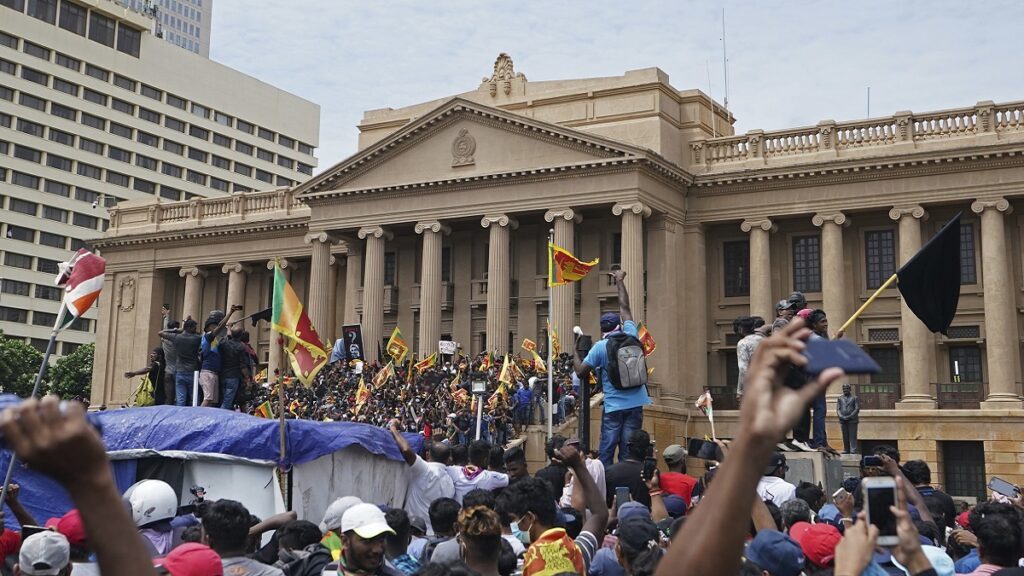 In 2022 Sri Lanka faced its deepest ever economic and political crisis. The country’s descent into chaos accelerated from March, sweeping away high-level bureaucrats and political leaders held culpable for implementing the misguided economic policies at the heart of the country’s problems. The political casualties failed to allay public disaffection with prolonged power outages, queues and shortages of essential commodities.

The primary target of public unrest was Sri Lanka’s elected president, Gotabaya Rajapaksa. His ouster in July was achieved amid outbreaks of violence and the occupation of key government buildings by protesters. For a while, there were real concerns that Sri Lanka would descend into a state of anarchy. The fact that it was averted — with a transfer of power to a new president elected by a majority of votes in parliament — speaks not only to the country’s tradition of democracy but also a desire to avoid repeating past experience of violent upheavals.

The parliament’s appointment of Ranil Wickremasinghe as Sri Lanka’s eighth president was not without controversy. Wickremasinghe, the nominated candidate of the departing Rajapaksas, and his party had also been roundly defeated at the parliamentary polls in August 2020. Yet he was still seen as the safest pair of hands to carry Sri Lanka through what promises to be its toughest economic setback since independence.

Complex negotiations with creditors on debt restructuring following a sovereign foreign debt default in April, and an International Monetary Fund (IMF) bailout program, demanded a sound grasp of global economic forces and geopolitical relations. A seasoned politician who has held the post of prime minister on numerous occasions, this was territory familiar to the new president.

Wickremasinghe lacks an assured parliamentary majority to carry through painful reforms — as well as the legitimacy of having been elected by the people to do so. These could prove serious drawbacks as Sri Lanka struggles to regain its footing in 2023 and beyond.

A cost-of-living squeeze — that placed Sri Lanka in the top five countries with the highest food price inflation for much of 2022 — tipped many vulnerable Sri Lankans into poverty. Poverty is set to swell, even as job and income losses signal the country’s plunge into a prolonged recession. In 2022, GDP is expected contract by close to 9 per cent and the latest estimates suggest that the economy will contract by 3–4 per cent in 2023.

With few policy choices, Sri Lanka is banking on an IMF bailout to facilitate access to bilateral and multilateral financial support to get the economy back on track. The IMF’s four-year US$2.9 billion program provides limited provision of liquidity. What matters is the program’s ability to catalyse other official lenders, private investors and creditors confidence in coming to the party. But the standard IMF policy prescription that demands stringent financial discipline means that adjustment costs will be front-loaded, preventing the government from spending its way out of recession. Accordingly, taxes are being hiked and expenditures are being cut.

Even at the best of times — with a strong and stable government at the start of an electoral cycle — this kind of reform agenda is politically fraught. An economic crisis can sometimes be the catalyst of a major economic overhaul, but in the absence of political stability the downside risks are significant. Governments have far fewer resources in hand to compensate those who are bound to lose out from reforms. The loss of faith in political leaders and institutions, with the Sri Lankan public having clearly demonstrated its readiness to punish those who have failed to deliver, amplifies the perils.

The best hope for Sri Lanka is a swift conclusion to the debt restructuring negotiations. The evidence is sobering in today’s complex creditor landscape. For Sri Lanka, having China, India and Japan as its largest bilateral creditors alongside primarily US-based private bond holders adds a layer of complexity in working out treatment that is comparable and acceptable to all. China has been unwilling so far to take a cut in principal repayments, preferring to refinance payments with fresh loans. Sri Lanka will have to call on all its diplomatic skills to persuade creditors to arrive at a mutually agreeable formula in 2023.

Even if everything goes according to plan, it will be another two or three years before the Sri Lankan public feels any real improvement in economic conditions. The erosion of real wages and the introduction of higher taxes are squeezing disposable incomes, prompting exit by many to seek better living standards overseas.

With Sri Lanka’s economic progress set back by years by the debt crisis, the government can only hope that people will have enough patience to wait until painful austerity-inducing reforms start to work. With all the uncertainties, next year will be crucial for Sri Lanka as it gears up for the all-important presidential elections in 2024. Meanwhile, containing public disaffection amid calls for early elections — while ensuring that political uncertainty does not delay economic decision-making — is set to test the skills of even the most hardened and experienced political leader.

Dr Dushni Weerakoon is Executive Director and Head of Macroeconomic Policy Research at the Institute of Policy Studies of Sri Lanka.