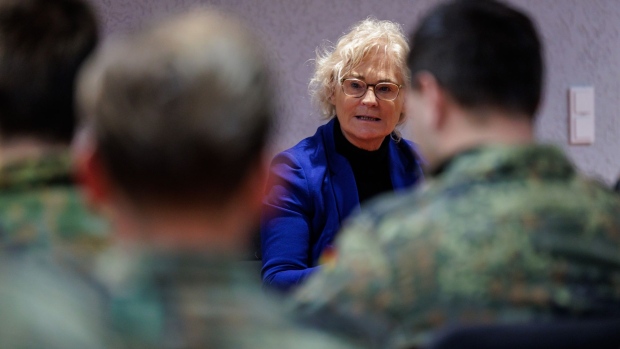 BERLIN — German Defence Minister Christine Lambrecht resigned from Chancellor Olaf Scholz’s government on Monday, the culmination of growing doubt about her ability to revive Germany’s armed forces against the backdrop of the Ukraine war.

Her decision dealt a blow to Scholz at a time when Germany is under pressure to approve an increase in international military support for Kyiv, and Germany’s defence capabilities have been called into question after several Puma infantry tanks were put out of service during a recent military drill.

The pressure to find a successor is mounting also because U.S. Secretary of Defense Lloyd Austin is expected in Berlin on Thursday and will attend a conference on Friday at the U.S. military base in Ramstein, in the state of Rhineland-Palatinate, to discuss further support for Ukraine, including whether to send German-built battle tanks.

Lambrecht asked Scholz to dismiss her, as formally required, and he has approved, a spokesperson for the Social Democratic (SPD)-led coalition government said.

During a visit to arms manufacturer Hensoldt, Scholz thanked Lambrecht for her service and said he would act fast to replace her. “I have a clear idea and it will be known very quickly for everyone how this should proceed,” he told reporters.

Scholz has promised to staff his cabinet with equal numbers of men and women. If a man should succeed Lambrecht, this could result in further reshuffling.

Lambrecht was blamed by critics for failing to get the German armed forces, known as the Bundeswehr, back in shape quickly, despite a 100-billion-euro ($108.11 billion) special fund being agreed for that purpose after Russia invaded Ukraine.

Economy Minister Robert Habeck praised Lambrecht for her ambition to reform the Bundeswehr and said her decision would not have been taken lightly. “It shows the kind of pressure she is under, but also how she is trying to keep the office from being damaged,” Habeck said at an energy conference in Berlin.

Lambrecht was most recently criticised by media and opposition figures for posting a New Year’s message on social media in which she thanked servicemen and women, but struggled to be heard against background noise from firecrackers and seemingly mixed up the war in Ukraine with pleasant personal encounters.

“What kind of a year was 2022? It confronted us with many incredible challenges. There is a war raging in the middle of Europe. Associated with this were for me many special impressions, many encounters with interesting, great people,” Lambrecht said in the video.

Marie-Agnes Strack-Zimmermann, head of Germany’s parliamentary defence committee and a member of Scholz’s junior coalition partner, the Free Democrats (FDP), called for her successor to be installed quickly.

“I now expect the Social Democrats to name a successor as soon as possible who is assertive towards the ministry, does not abuse the defence ministry for other political ambitions and, above all, brings with them an understanding and heart for the soldiers,” she said in remarks carried by the Funke media group.