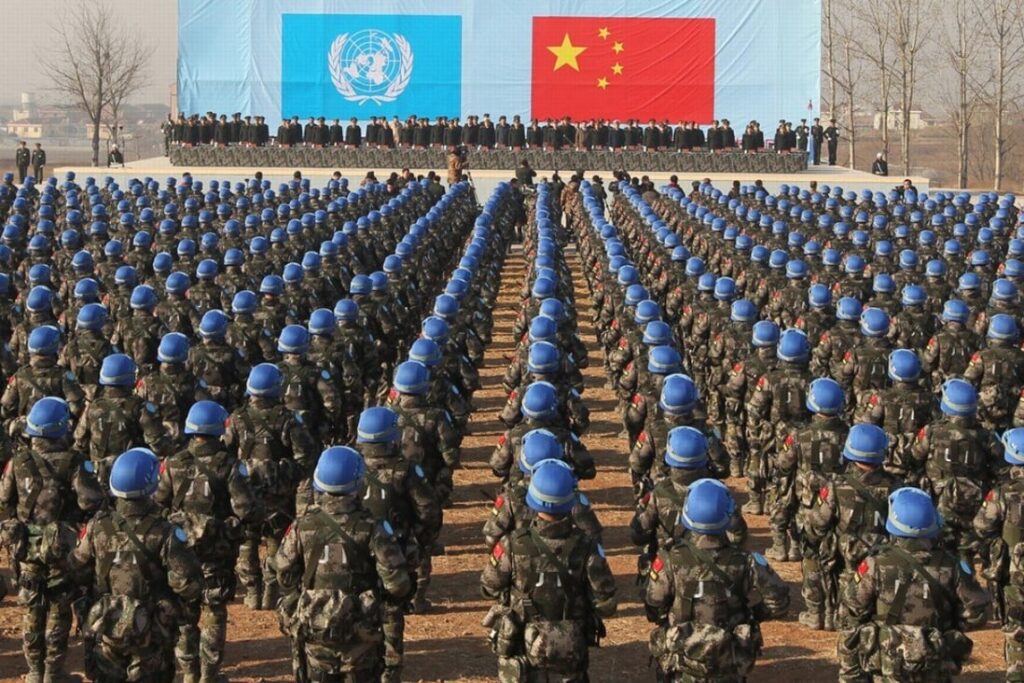 PLA strategists have described China’s non-war military operations abroad as the “soft use” of “hard power.” While its approach to MOOTW generally tends to align with international law and accepted practices in international security cooperation, China’s evolving military capabilities and instances of coercive behavior have also raised international concern, especially in the context of a more fractious and competitive security environment. Thus, a nuanced understanding of the underlying motives and methods behind China’s embrace of MOOTW is needed, including an appreciation for how China’s non-war military operations may advance international cooperation or foment future conflict scenarios. It is essential for analysts and policymakers in the US, and globally, to discern between Chinese MOOTW that threaten regional peace and stability and those that have the potential to strengthen and contribute to the rules-based international order.

The end of the Cold War and the rise of globalization brought about a sudden shift in focus for the militaries of the advanced industrialized world. This shift resulted in some countries leaning away from preparation for a major conflict and toward the management of non-traditional security challenges, including transnational threats such as environmental disasters, humanitarian crises, and challenges from non-state actors.

In 1995, the US Department of Defense published JP 3-07, Joint Doctrine for Military Operations Other Than War (MOOTW), which articulated the ways in which the United States would use military force aside from engaging in sustained combat operations. MOOTW were understood to advance national security priorities primarily through three interrelated mechanisms: deterrence, forward presence, and crisis response capabilities.1 The doctrine made explicit the use of the armed forces to help shape the security environment and diplomatic relations through persistent military presence activities such as “periodic and rotational deployments, access and storage agreements, multinational exercises, port visits, foreign military training, foreign community support and military-to-military contacts.”2 Within this doctrine, the military was conceived of not just as a warfighting tool, but also as a political instrument used to shape an international environment favorable to the United States. As General John Shalikashvili – then Chairman of the Joint Chiefs of Staff – wrote in the preface to the Joint Doctrine for Military Operations Other Than War, although the military has “historically focused on warfighting, our military profession is increasingly changing its focus to a complex array of military operations other than war.”3

Inspired by US MOOTW doctrine, the People’s Republic of China (PRC) and its People’s Liberation Army (PLA) in recent years have devoted significant attention and resources to addressing non-traditional security challenges and have embraced MOOTW – sometimes translated as “non-war military activities/operations” – as an important conceptual framework.6 Unlike in the US, China has maintained MOOTW as a formal component of its military doctrine. Both authoritative and quasi-authoritative Chinese military sources list MOOTW as an official category of PLA activity. For example, the 2013 edition of the Science of Military Strategy, a highly influential publication of the PLA’s Academy of Military Science, lists three general strategic means for a military: acts of warfare, acts of deterrence, and military operations other than war.7

China’s President Xi Jinping recently signed an order putting forth a set of trial guidelines to provide a specific “legal underpinning for non-war military operations” under China’s domestic legislative framework.8 According to the public outline of the order, the primary objective is to prevent and neutralize risks and challenges to China’s interests, to maintain national sovereignty and regional stability, and to standardize and regulate the PLA’s planning and conduct of non-war military operations. Proponents of this move consider the order to be a necessary step to clarify the formal legal scope of China’s non-war military operations, ranging from disaster relief and humanitarian assistance to the limited use of force overseas in the context of maritime escorts and peacekeeping, for example. Skeptics, on the other hand, perceive the announcement as a strategic justification for China’s expanding military footprint beyond its borders, and a possible allusion to potential military operations targeting Taiwan. For example, Eugene Kuo Yujen, an analyst with Taiwan’s Institute for National Policy Research, has argued that the announcement seemingly replicated Vladimir Putin’s description of Russia’s invasion of Ukraine as a “special military operation” rather than a war or an invasion.9

As demonstrated by the attention generated by President Xi’s recent order, China’s embrace of MOOTW remains understudied compared to its discourse and doctrine around both warfare and deterrence. This report posits that China’s doctrine and conduct of MOOTW are essential to understanding how Beijing understands the strategic and operational utility of its armed forces, and the means by which it aims to achieve foreign policy objectives in the 21st century. This report seeks to help fill a gap in the literature by examining China’s MOOTW on its own terms as a distinct category of Chinese military activity. It is necessary to examine China’s pursuit of MOOTW, and to delineate its development and deployment of different capabilities over time, to understand the important roles that MOOTW continue to play in advancing China’s foreign policy objectives, and to better discern how and when American and Chinese interests may align or diverge.

At the turn of the century, China’s security calculus focused principally on maintaining domestic order and ensuring stability on its periphery. But in the past two decades, the steady outflow of Chinese investments and citizens have exposed China to a broad array of non-traditional security challenges, forcing the PRC government to develop greater capacity to assert and protect overseas interests. The Belt and Road Initiative now links China’s economy and citizens to dozens of countries around the world, including many in precarious security situations. Simultaneously, China has sought to portray itself as both a major power and a “responsible stakeholder” in the international community.10 MOOTW, and international security cooperation more broadly, have thus become indispensable to fulfilling both of these roles. In the words of PLA strategists, China’s military operations abroad are the “soft use” of “hard power.”11

The PLA now conducts a range of peacetime operations that it lacked the capacity or political will to carry out two decades ago. The PLA patrols the Gulf of Aden as part of an international counterpiracy coalition and sends combat units to participate in United Nations (UN) peacekeeping operations in Sub-Saharan Africa. It has conducted non-combatant evacuation operations in the Middle East and has established its first overseas “support base” in Djibouti. The PLA also pursues military diplomacy through combined military exercises and naval port calls around the world.12 Closer to home, the PLA and the People’s Armed Police (PAP) conduct “rights protection” operations in the East and South China Seas, cooperate with Southeast Asian nations on maritime security and counter-narcotics operations, and deploy within China to respond to disasters and social unrest. As a testament to the importance of these activities, a 2017 article by Central Military Commission Vice Chairman Xu Qiliang praised them as a series of “major military operations” conducted under the leadership of Xi Jinping, that have “effectively safeguarded national sovereignty, security, and development interests, boosted the prestige of the nation and the military, and enhanced national self-confidence and pride.”13 In total, such non-war operations currently constitute a sizeable portion of the PLA’s actual activities.

Some of China’s operations ostensibly contribute to shared goals of international peace and security and have thus drawn praise from the UN and other multinational coalitions.14 China is now a leading contributor to UN peacekeeping operations, and has significantly expanded its conduct of international humanitarian assistance and disaster relief operations.15 However, China’s increasingly assertive (and arguably, illegal) MOOTW concerning its contested jurisdictional and territorial claims in the South China Sea, for example, have exacerbated longstanding disputes with its neighbors, and China’s abusive actions in Xinjiang have drawn widespread condemnation.16 Furthermore, some observers of the PLA’s growing international role have raised concerns over how these new military capabilities may affect their own countries’ security. Through its participation in international peacekeeping, for example, the PLA has demonstrated improved expeditionary capability in a way that may “overlap” with future warfare requirements and may make Beijing more capable of using force abroad.17

Scholar Erik Lin-Greenberg has labeled these spirals “non-traditional security dilemmas” and argues that participation in MOOTW “exacerbates security competition by revealing military capabilities and providing states with skills that make offensive action easier.”18 This is compounded by the fact that competitors are often suspicious of one another’s underlying aims for conducting MOOTW and may view these operations as a “threatening indicator of a state’s more assertive foreign and defense policy.”19 For example, US policymakers have heavily scrutinized China’s first overseas base (officially a “logistics facility”) in Djibouti, which opened in 2017 with the mission of supporting the PLA’s MOOTW in the region.20

However, just as China’s pursuit of MOOTW may raise real security concerns for the US, it also presents opportunities for China to meaningfully contribute to global security objectives in line with international norms.21 MOOTW may provide both shared points of cooperation as well as sources of increased international competition. Thus, separating the potential risks from the benefits requires a nuanced understanding of the underlying motives driving the PLA’s military operations other than war and the degree to which they may directly benefit China in future conflict scenarios.

This report first provides an overview of the PLA’s development of MOOTW and explains how China views them as part of a broader national security doctrine. This is followed by a summary of the PLA’s key MOOTW, citing specific examples of the doctrine in action. The report then outlines PLA development in pursuit of MOOTW and how this may support its future combat capabilities and operational concepts. Finally, the report concludes with a discussion of how policymakers and analysts can better discern between PLA activities that jeopardize, versus contribute to, international peace and security.