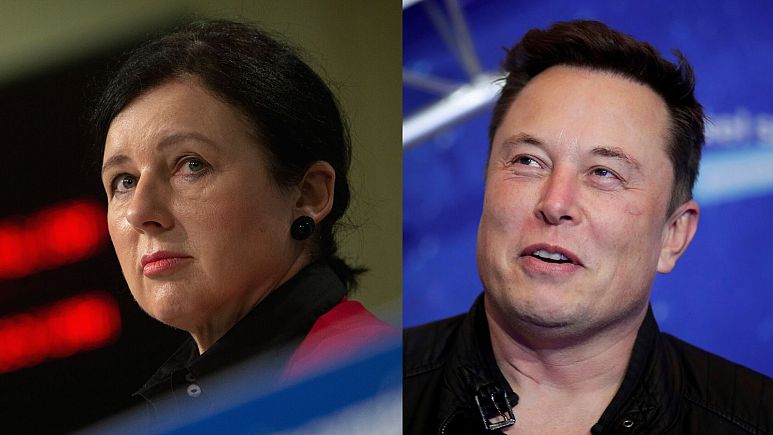 “The time of the Wild West is over,” the European Commission’s Vice-President for Values and Transparency Věra Jourová warned Elon Musk amid the continuing fallout of the billionaire’s $44 billion (€40.6 billion) takeover of Twitter.

Speaking with Euronews Next at the World Economic Forum (WEF) in Davos on Wednesday, Jourová said the platform would face sanctions if it didn’t comply with new EU online regulations.

Asked if the bloc had enough clout to make big platforms like Twitter comply with the new laws which aimed to create safer digital spaces, she said that there was “nothing stronger than legislation in force”.

“But at the same time, we cannot accept, for instance, illegal content online and so on. So, our message was clear: we have rules which have to be complied with, otherwise there will be sanctions,” she added.

A suite of new legislation, including the DSA and the Digital Markets Act (DMA), was signed off by the EU parliament in October 2022 and is expected to come into force later this year.

Under the new regulatory framework, which aims to protect the rights of online users and remove illegal content or disinformation, platforms could expect to be fined up to 6 per cent of their annual revenue if found to violate the rules by EU regulators.

Pressed on whether financial sanctions would be enough to make platforms like Twitter comply with the new rules, Jourová said that “the legislation was never the only option” to persuade platforms to cooperate.

“I’ve worked with the platforms, with the ‘big boys’ – and girls sometimes – already for several years. And for me, the legislation was never the only option,” she told Euronews Next.

“How to push them to do things? We had some ‘gentlemen’s agreements,’ like the Code of Conduct against Hate Speech, which was very important in 2016 when we saw an extreme rise of hatred online targeted to concrete people or groups of citizens.

“So, I always like to combine decent communication and discussion, and testing how far they can go under the framework of some sort of social responsibility”.

In November, Thierry Breton, the EU Commissioner for the Internal Market, sought assurances from the Tesla and SpaceX CEO in November that Twitter would be ready for the DSA.

Asked whether Musk was acting in good faith with the EU, Jourová said the bloc was a “bit confused” by his “arbitrary decisions” to date, adding that “confidence was weakened”.

“One day, he wakes up and he dislikes some of the accounts so he removes them,” she said. “I have not spoken to him. Of course, we are watching and listening”.

In November, shortly after Musk’s takeover, Twitter triggered mass layoffs in its European offices and disbanded its Brussels office in what was seen as a potential snub to EU regulators.

“I think that the confidence has been weakened. And I had a quite high level of confidence when it comes to Twitter,” Jourová said.

“I have to say that we worked with knowledgeable people – with the lawyers, with sociologists – who understood that they have to behave in some decent way not to cause really big harm to the society.

“I always felt that this notion of responsibility was there. So, this is what I don’t feel from Elon Musk personally. But we will see”.