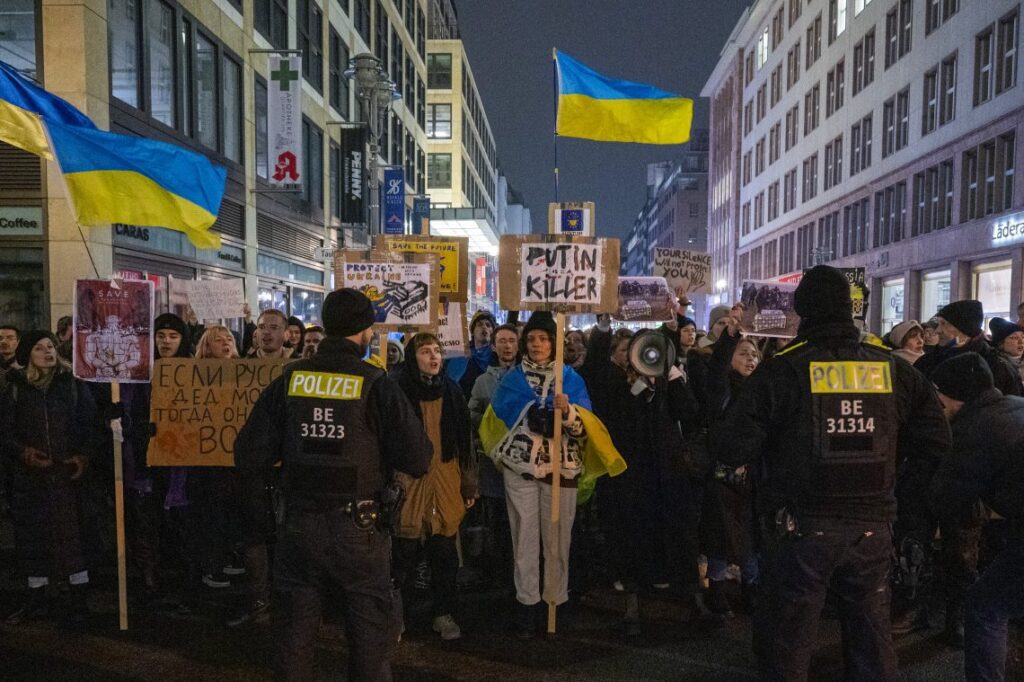 In November 2011, during a visit to Berlin, then-Polish Foreign Minister Radoslaw Sikorski caused a sensation with a statement about Germany’s role in the European Union. Ironically, a Pole called on the Germans to show their weight more strongly in Europe. “I fear German power,” Mr. Sikorski said, “less than German inaction.” More than 10 years later, half a year after Russia’s invasion of Ukraine, Polish Prime Minister Mateusz Morawiecki wrote in an article for the British Spectator: “If Europe had sent weapons to Ukraine on the same scale, and at the same pace, as Germany, the war would have ended long ago: with Russia’s absolute victory. And Europe would be on the eve of another war.”

Poland is not alone in its criticism of the German government’s half-hearted support for Ukraine. Although Germany has started supplying heavy weapons to Ukraine after hesitation under growing pressure from NATO allies, especially the United States and the United Kingdom, confidence in German reliability remains low in Eastern European states. The American military strategist Edward N. Luttwak puts the bulk of the blame on Social Democratic Chancellor Olaf Scholz: “[Vladimir] Putin’s long-war signaling has multiple targets including Germany, whose Chancellor Scholz had expected a quick Russian victory … and who did not support Ukraine until forced to do so by his coalition partners. He wants a cease-fire on any terms.”

Surveys find that the attitude of the German government corresponds to the expectations of large parts of the German population. A representative survey conducted in August by the opinion research institute Kantar Public on behalf of the Korber Foundation showed that 80 percent fear a spillover of the war from Ukraine to neighboring NATO countries and 69 percent fear a Russian nuclear strike; 72 percent say they feel threatened by Russia. At the same time, however, most Germans (52 percent) want the government to continue to act cautiously in international affairs. Of the 41 percent of respondents who would like to see a stronger presence, 65 percent hope for more diplomacy, but only 14 percent for more military support, and 13 percent for more financial commitment. More than two-thirds of respondents in this survey were against Germany’s leading role in the military field, which Social Democratic Defense Minister Christine Lambrecht described as inevitable.

Why is it that public opinion in Germany, whose eastern states were occupied by the Soviets, is so different from that in Eastern European countries?

It is striking how big the differences between Germans in the east and west of the country are. In the east, in what was the former German Democratic Republic (GDR) with a population of 16.4 million in 1989, only 31 percent demanded more toughness toward Russia, while in the west, (the former Federal Republic with a population of nearly 63 million), 47 percent wanted more toughness.

Many still think Ukraine is part of Russia

In a representative study, the Center for Monitoring, Analysis, and Strategy (CeMAS) concluded that approval ratings for pro-Russian conspiracy theories among the German population have increased overall over the course of the Ukraine war. In April 2022, 12 percent agreed with the statement that NATO had provoked Russia until Russia had to go to war. In October, 19 percent were already of this opinion, 16 percent of them in western Germany and 33 percent in eastern Germany. The opinion that Ukraine is part of Russia was shared by 12 percent in the west and 24 percent in the east.

Why is it that public opinion in Germany, whose eastern states were occupied by the Soviets, is so different from that in the Eastern European countries? In Poland, the memory of the double occupation by Germany and Russia during World War II is omnipresent; in Hungary, the violent suppression of the 1956 uprising by Russian troops is deeply rooted in the collective consciousness, the same in then-Czechoslovakia, invaded by Warsaw Pact troops in 1968. The Germans were spared similar traumatic experiences in the GDR. The uprising of June 17, 1953, which was brutally suppressed by the Soviet occupying forces and the police forces of the Socialist Unity Party regime, was less consequential in comparison.

German disappointment with the West

The East Berlin-born historian Ilko-Sascha Kowalczuk was particularly concerned with the reappraisal of the Socialist Union Party dictatorship and its end. Mr. Kowalczuk attributes the positive attitudes in eastern Germany toward Russia to the era of General Secretary of the Communist Party Mikhail Gorbachev (1985-1991). At that time, many East Germans had hoped that the German Democratic Republic would liberalize under the pressure of reforms in the Soviet Union. They regarded Mr. Gorbachev as an ally against the sclerotized communist leadership. At the time, only a few expected the possibility of reunification. Since the fall of the Berlin Wall, many in eastern Germany have felt disappointed by the West. The prevailing attitude is less pro-Russian than anti-Western. Those who support Russian President Vladimir Putin want to provoke and express their rejection of the West.

America is still ‘the real enemy’

The Potsdam military historian Sonke Neitzel says that a considerable number of Germans “still consider the U.S. to be the real enemy.” Although deep-rooted anti-Americanism is an all-German phenomenon, as a long-term effect of German Democratic Republic propaganda it is much more pronounced in the east than in the west. Voters of the right-wing Alternative for Germany (AfD) and the Left Party, both of which have their greatest voter potential in the new federal states, are particularly susceptible to this. Die Linke, the Left Party, is the former East German governing one, the Socialist Union Party, which was not dissolved after the fall of the Berlin Wall,

In trivializing Russia’s war of aggression and rejecting support for Ukraine, the former communists agree with the right-wing extremists. It is difficult to say how far the direct influence of Russian networks in eastern Germany extends. The contradictory feeling of many Germans in the east that they belong to the West without perceiving it as their homeland is helping Russia influence public opinion in Germany.

The German elites were forced several times after World War II to redefine their place. By 1945, the catastrophic defeat had dispelled the illusion of an independent great power. During the Cold War, Germany was a mere middle power in two respects: geopolitically between the Soviet Union and the U.S., and in the international hierarchy between the superpowers and the small European states. The firm connection to the U.S., which Chancellor Konrad Adenauer (1949-1963) vigorously pursued, derived from his belief that a free West Germany could only exist as part of transatlantic unity.

This only changed with the end of Soviet rule over East Germany and reunification. Although the U.S. remained the only superpower, its weaknesses were already revealed after the turn of the millennium in the wars in Iraq and Afghanistan. The gradual shift of American interests to the Pacific, the rapid rise of China, and the consolidation of a neo-imperialist regime in Russia ushered in the transition to a multipolar world in which German politicians hoped for more independent foreign and security policy. Only the Russian invasion of Ukraine in February 2022 ended the illusion that Germany was no longer dependent on the alliance with the U.S.

Differences over Ukraine in the German ruling coalition

While the Scholz government does not question the transatlantic alliance, the differences between the parties belonging to the “traffic light coalition” are becoming increasingly apparent. In the Social Democratic Party of Germany, many interpret Russian aggression in Ukraine as a proxy war with the U.S. They advocate cutting off arms supplies and persuading the Ukrainian leadership to negotiate unconditionally with Moscow. In contrast, the Greens, who are vehemently in favor of arming Ukraine, seem to have put aside their traditional reservations about Washington. The third governing party, the liberal Free Democratic Party, has always been transatlantic-oriented and sees no reason to change. It, too, is almost unanimously in favor of supporting Ukraine.

The justified criticisms by the Americans and their Eastern European allies were acknowledged only after the Russian attack on Ukraine.

This is essentially also true of the opposition Christian Democratic Union (CDU). But the originally conservative party moved to the left under Angela Merkel. In line with the Social Democrats, Ms. Merkel accepted a deterioration of relations with Washington, which was particularly evident in the construction of the Nord Stream 2 gas pipeline.  The justified criticisms by the Americans and their Eastern European allies were acknowledged only after the Russian attack on Ukraine.

Although new CDU leader Friedrich Merz refrains from open criticism of Ms. Merkel, he emphasizes loyalty to the alliance with the U.S. However, this position is controversial. For example, the CDU prime minister of Saxony, Michael Kretschmer, spoke out in favor of “freezing” the war in Ukraine instead of supplying weapons to Kyiv. Mr. Kretschmer received applause for this stance from Sahra Wagenknecht (Die Linke) and from Alternative for Germany (Alternative fur Deutschland, AfD) leader Tino Chrupalla.

On the right fringe of the CDU, in the AfD as well as in right-wing think tanks, such considerations find a great echo. Intellectuals who define themselves as national conservatives advocate rethinking the transatlantic bond and seeking an understanding with Russia. In this context, it is worth noting that a book by the publicist Johannes Barnick was recently reprinted. First published in 1959 under the title “German-Russian Neighborhood,” it calls for a strategic partnership with Russia and warns that “an alliance of the liberal West and Eastern European nationalism” would mean renewed encirclement for Germany. Mr. Barnick’s thesis is now defended by Vladimir Putin’s biographer Thomas Fasbender, who considers a partition of Ukraine inevitable. For Russia, Germany is the “timeless partner of choice in Central Europe” to pacify the unstable areas between them. Considerations of this kind feed the fear of Eastern European politicians that Moscow and Berlin could once again agree on the domination of these countries. The Molotov-Ribbentrop Pact of 1939 continues to cast a shadow over relations between Germany and its neighbors.